The railway station is a gathering point for our travel or return in a region. Therefore, there is a flow of people coming and going from you all the time, precisely . Because there are so many people and friends. As a result, many merchants have also aimed at this place to promote their own products, and merchants often prefer the advertising method of railway station waiting halls, and its media effect is obvious. Today we will discuss the use analysis of the West Touch Screen System in the waiting hall of the railway station. 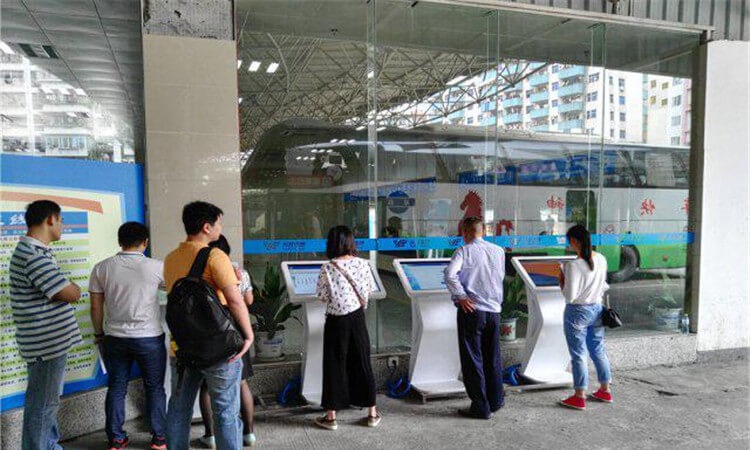 The touch system integrates advanced touch screen, industrial control, computer and other technologies. It can realize public information query, equipped with fingerprint scanner, scanner, card reader, micro printer and other peripherals. Specific requirements such as fingerprint attendance, card swiping, and printing can be realized. Touch screens include four or five-wire resistive screens, surface acoustic wave screens, infrared screens, and holographic nano touch films. It can meet the application needs of users in different regions and places. The touch screen system is a touch product that bundles the touch screen and related software together and equips it with an outer package for query purposes. The touch screen system truly integrates touch and control, greatly improving people’s work efficiency.

What are the advantages of the application of the touch screen system in the train station waiting hall?
Targeted

Because the railway station is a few of our departure and return points. Therefore, the target groups covered by the railway station advertisements are basically all spending groups. It has the advantages of large expenditures, large social impact, and potential expenditures. The company’s product promotion and brand promotion for the collective gathering, the effect is obvious. The long-term effectiveness and relevance of this media are difficult to achieve by other media.

Nowadays, there are many channels for media advertising, which can be said to be contending with a hundred schools of thought. It’s easy to let the audience’s vision become distracted and the recall decline. On the other hand, the advertising media touch all-in-one machine in the railway station waiting hall is just the opposite. Because of its unique positional constraints, coupled with the consistency of media release content. Therefore, the railway station advertising touch system has a great visual impact uniqueness and memory exclusivity. The advertising effect is remarkable, the visual impact is strong, the publicity is strong, and the sensational effect can quickly occur.

Generally, when we wait for the bus, it is the most boring and embarrassing time, and we have fierce and subconscious visual needs. This is the best time for the media advertising touch screen system to attract its visual attention. It’s the best visual scale and direct touch at close range. Guarantee the viewing rate and arrival rate of advertising information to the greatest extent. In addition, the advertisements include such elements as large screen area, beautiful design, novelty, eye-catching, obvious colors, and attractive appearance. The brightening effect is clearly compared with the twilight composition. Advertisements are highly recognizable, easy to generalize and promote the brand image and powerfully convey product information. With great visual impact and forced recall, it is durable and unforgettable.